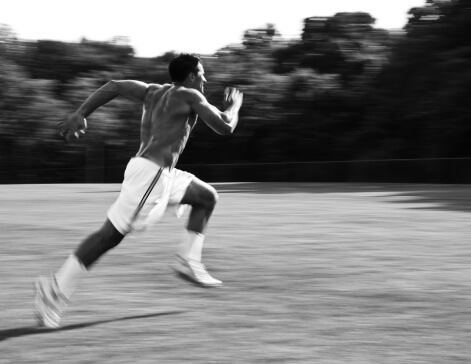 Short-burst training (SBT) is a variation of circuit training. SBT uses a series of high-intensity, short-duration exercises interspersed with brief periods of lower-intensity movement. Clients train as intensely as possible for intervals of 30–60 seconds – depending on the intensity level and the equipment/apparatus used for training – before entering the recovery phase. This pattern repeats throughout the workout. The intent is to utilize the anaerobic energy system, long thought to be the exclusive realm of sprinters and court athletes whose movements are too brief and powerful to engage the oxygen pathways of the cardiovascular system (Smith, 2002). During short-burst exercise, the body produces metabolic byproducts (hydrogen ions) that have been identified as the cause of acidosis (“the burn”). The cardiovascular exercise following the short burst of anaerobic exercise helps to neutralize or buffer this acidosis. The primary fuel used is carbohydrate (Smith, 2002), with stored fat kicking in later.

By contrast, traditional endurance training keeps the body moving longer at more moderate intensity levels, with the aerobic system maintaining function. The primary energy sources are carbohydrate and fat (Smith, 2002). There is abundant research verifying the physiological adaptations attributed to endurance training, especially improved exercise capacity—the body’s ability to sustain a given sub-maximal amount of work for a longer of time (Gibala et al., 2006). For many exercisers, the rewards include improved cardiovascular function, decreased incidence of diabetes, high cholesterol and hypertension, weight loss, and reduction of body fat. Those training for competitive sports count on aerobic training to gain needed stamina.